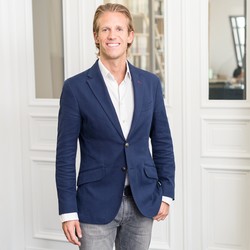 Ferry is serial-entrepreneur, Climate Activist and early stage Investor. In 2009 he and his brother Fabian founded DailyDeal - the first European couponing portal - sold it to Google in 2011 and subsequently worked for Google. In early 2013 Ferry and Fabian repurchased DailyDeal from Google, turned it profitable and sold it again in late 2015. In early 2016 Ferry co-founded FreightHub – the digital Freight Forwarder (>250 employees, >75m USD funding), which he is leading as CEO. Ferry also conducted 25+ Early Stage investments between 2011 and 2015 and has been Venture Partner with Earlybird Venture Capital since 2016. On a personal level, Ferry is passionate about finding the most impactful ways to fight the climate crisis and create a sustainable society – he is Co-Founder and Vice President of Leaders for Climate Action.

Ferry Heilemann and many more register for the Logistics Summit now!