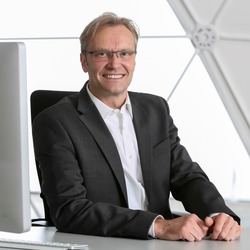 After his industrial engineer studies at Esslingen University of Applied Sciences, Thomas Loibl has already started in 1995 in the intralogistics sector at Haushahn Automation Systems based in Stuttgart. There he dealt with engineering, sales and implementation of international retrofit projects. Later, he headed this department. In 2004 he switched to viastore systems S.A. located in Barcelona. Nominated for the managing director he forced the development and expansion of the intralogistics supplier at the Iberian Peninsula. When he returned to Germany in 2009, he was head of international sales and responsible for the new business of viastore systems. In 2015, he became more familiar with the fascination of the integrated and networked intralogistics at Jungheinrich logistic systems. Additional facets opened up in the connection of manual and automatic solutions as well AGV- Systems. The choreography of different logistic systems, guided by an intelligent software meet the actual and future requirements of the intralogistics.

Thomas Loibl and many more register for the Logistics Summit now!